Logan MacDonald and Max MacDougall, both of Winnepeg, Manitoba, demonstrate technique at as Jordan Burroughs looks on

One of America’s greatest and most decorated was in Bismarck Saturday for camp with over 300 wrestlers from four different states and Canada. Fresh off his ninth consecutive consecutive World Team spot at 74 KG, Nebraska Regional Training Center’s Jordan Burroughs came to Legacy High School in Bismarck courtesy of the Gorilla Wrestling Club. Getting Burroughs to the capital city was a year-long process sparked by Gorilla Club Head Coach Justin DeCoteau way back in April of 2018. With Burroughs still training full time and competing for World Medals, plus his duties as husband and father to two children, his clinic schedule year-to-year is very limited.

“We already had our clinicians set up for the Summer of 2018,” DeCoteau noted to NDwrestle. “As we were throwing around names at the Minot Freestyle tournament it sparked the idea to go really big for summer of 2019.”

The idea led to texts back and forth with six-time North Dakota state champion Jordan Shearer, who competed for the last four years at the University of Nebraska where Burroughs competed in college and still trains.

“Jordan Shearer was a huge factor in making this happen and we couldn’t be more appreciative,” DeCoteau said. “We got into contact with Jordan Shearer and he let Jordan Burroughs know the Gorilla Wrestling Club was serious about bringing him in.” 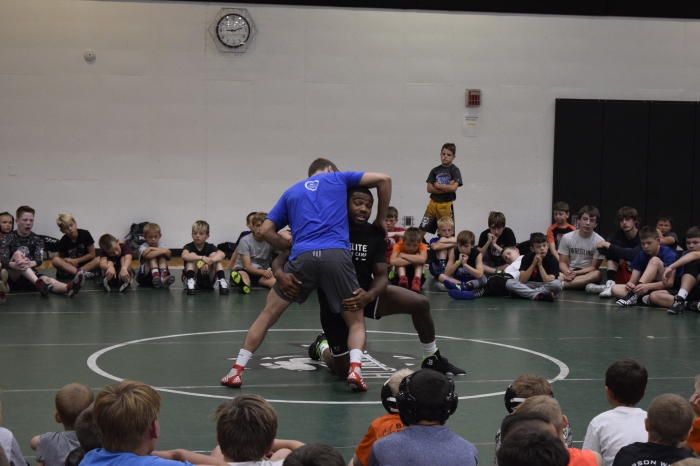 Burroughs was aided at camp by Jordan Shearer and and his younger brother Jesse. Jordan Shearer is foregoing a final season at Nebraska to begin the next stage of his life; medical student at the University of North Dakota. Jesse Shearer will enter his third year at North Dakota State this fall.

On top of world-class technique, Burroughs also started things with a message of leadership. Burroughs emphasized that each person is capable of being a great father, mother, coach, or friend regardless of accomplishments on the mat.

As a surprise to campers and coordinators, Burroughs also gave the competition singlets from his legendary best of three Final X matches with Isaiah Martinez to two lucky campers.

“The giveaway speaks to the type of person Jordan is,” DeCoteau said. “We were confident bringing him here would be huge for the club and state of North Dakota as a whole, but he exceeded any and all expectations and blew us away with his personality and message.”

Leland Irwin of New Salem brought his kids camp and left floored by the experience.

“Find me a brick wall and I could run through it,” Irwin said after the first session. “Man is (Burroughs) inspirational.”