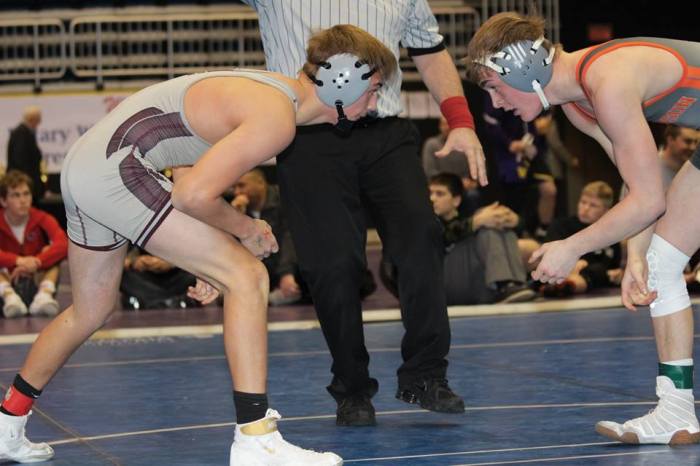 On the final night of the regular season, Bismarck High and Dickinson will face off at Dickinson High School for the WDA dual crown.  The Demons, winners of the last four state dual crowns, will have a serious challenge in a Dickinson Midget team that boasts depth from bottom to top.  In total, nineteen wrestlers ranked in the latest NDWresle poll will take the mat for either team, with the Midgets edging the Demons in ranked wrestlers 10-9.

Mr Headlock’s Keys to the Match

*Odd Scheduling:  For this match, Bismarck is on the second day of a back to back that started Thursday night against rival Century.  This means two weigh-ins in a row for Bismarck High and a one pound allowance for both squads.  Dickinson is scheduled to wrestle both Minot and Bismarck High on the same evening, with Minot first and Bismarck after. Bismarck is only there to dual Dickinson. The match with Bismarck High will decide the region champion whether Dickinson falls to a Minot or not, but having to wrestle a dual first while the opponent rests isn’t ideal.

*Demons Dominant Lower Weights: As is always the case with Bismarck teams, the Demons are nearly unbeatable from 106-138. Each Demon wrestler in that span is ranked, with all but Preston Fettig at 132 ranked int he top three.  How many bonus point wins can the Demons rack up against a group of strong light weights for the Midgets?  Can guys like Houston Crimmins, Henry Nelson, and Joshua and Brendan Johnson limit BHS Bonus?

*Jaron Berger is a huge X-factor for Dickinson:  The second ranked wrestler at 132 is 1-2 against Bismarck’s Preston Fettig this season, but has come on strong over the last month.  Bismarck is at its best when the team can stretch its lineup using its two talented 120 pound wrestlers-#3 Kaden Renner and #2 Brock Fettig- at 120 and 126 pounds.  With Berger sitting at 132, it is probably too great a risk to bump 126 Laken Boese up a weight class and fit both Fettig and Renner in.

*INJURIES: Both the Demons and Midgets lost title contenders over Christmas break that have not returned.  For Bismarck, 160 Gage Roaldson was the last ranked piece for the Demons before 285 Chase Dockter.  That gap is now bigger.  For Dickinson it is #2 ranked Troy Berg, who likely would force Bismarck to keep stud horse Ryan Ripplinger locked into 138 pounds.  Will either be back for the matchup tomorrow night and the rest of the season?

*Bismarck High Open in the Upper Weights: If the Century dual Thursday was any indicator, Bismarck High will be open at 170 or 182, with senior Connor McGregor able to go at either spot.  If McGregor goes 170, you can expect Dickinson to grab the forfeit at 182 and bump #2 ranked Tanner Jarret to 195, where Bismarck got a pin out Tyler Schmit against Century.

Tale of the Tape (projected)