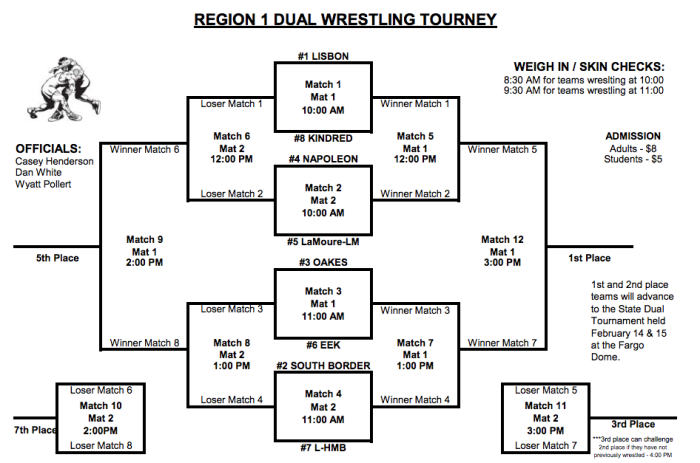 Region 1 duals kicks off Saturday at 10:00 AM in Ellendale with state #1 Lisbon the top seed.  The Broncos are unbeaten in dual action this season, but will be tested by three other teams also in NDwrestle’s Class B top ten.  South Border is seeded second on the strength of a 39-33 victory over Oakes way back on December 6.  That dual saw an even seven match split, with South Border scoring an extra pin for the victory.  A lot has changed since that match.  Oakes has been without 160 pound state placer Taylor Schall since December 15, and South Border has shifted its middle weights down a weight class.

The first round bout to watch is between Napoleon and LaMoure-LM.  Napoleon defeated LaMoure 43-30 on January 24 with two tossup matches at 132 and 138 splitting for either team.  Tucker Schneider of Napoleon defeated Andrew Hoff 3-2 at 132, while Garrett Hebl of LaMoure knocked off Levi Lang 12-11.  Should Napoleon get the W, expect to see fireworks in their semifinal with Lisbon.  Lisbon defeated Napoleon 47-25 on January 10, but the dual was filled with  matches of intrigue featuring top ranked wrestlers.  Lisbon has previously defeated Oakes 47-18 and South Border 36-18.

Review these important dual match ups from the regular season: