Though Mary hasn’t wrestled a match at the Super Region III tournament slated to start Friday morning, the team already has some good news going into the weekend.  The Marauders swept each category of the NSIC postseason awards including NSIC Wrestler of the Year, NSIC Rookie of the Year, and NSIC Coach of the Year.

The NSIC Wrestler of the Year is Marauder junior Tate Barnhardt. Barnhardt, a two-time state champion from St. Mary’s Central High School in Bismarck, was undefeated in seven matches at 133 pounds this season.  His record stands at 25-5 and finished the season on a six match win streak.  Barnhardt has won fifteen matches by bonus this season including five of each pins, technical falls, and major decisions.

“Tate has bee Mr. Consistent for this team for three years now,” head coach Adam Aho noted.  To win this award you have to wrestle well in eight duals, and Tate does the work outside of the room to take care of himself so this is possible.” 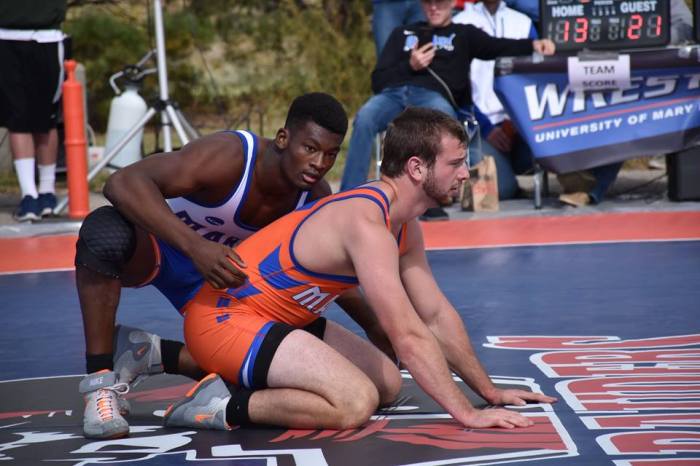 The work Marauder head Coach Adam Aho has done bringing these guys up the hill hasn’t gone unnoticed either.  Aho was name NSIC coach of the year after a 5-3 NSIC dual record that includes a win over then #9 ranked Upper Iowa.  Under Aho’s direction, the Mary program has gone from one with only around ten wrestlers on the roster, to one consistently ranked inside the top 25 in the nation this season.