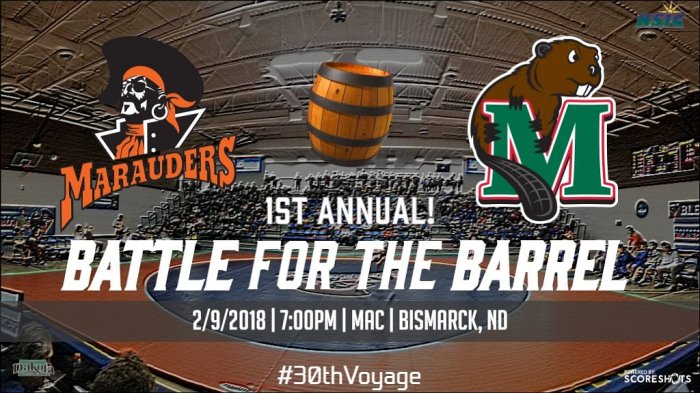 Minot State travels to the University of Mary tomorrow for their both teams’ penultimate NSIC match of the season.  The teams faced off way back in November at Minot State in a non-conference match with pride and a victory over in-state rival on the line.  The Marauders won that match 21-15, but matches were split 5-5.  The difference was bonus point victories from Mary at each of the first four weight classes, including a pin For #9 ranked Marauder Tate Barnhardt.

Obviously a lot has changed in the last three months; new wrestlers have entered the lineup, and some rookies have gained their footing while other veterans have faded.  Either way, the dual will likely come down to two very key matches.  Mary has more wiggle room because of the bonus point potential provided by the aforementioned Barnhardt and 149 Rudy Guillen, but Minot State certainly has a pathway to victory.  An argument could be made that the winner of the 125 pound match gives their team a very strong chance at victory.  That matchup is a repeat from the November dual in which Mary’s Nate Human defeated Dean Arevalo by major decision 15-6.  Don’t let that score fool you, Arevalo has become one of Minot State head coach Evan Forde’s most consistent wrestlers, and Humann has struggled a bit recently after a fantastic start to the season.   I expect a high scoring affair that will be decided by the wrestler that get back points .  The other big tossup is at 165, where Mary freshman Phil Springsteen, currently ranked #11 in the nation, will look to avenge one of his few losses on the season against Minot State’s Carlos Toledano.  Toledano upended the unknown commodity Springsteen 8-3 on November 8.  Can the Minot State senior do the same to the Springsteen that is now on the radar of every team in the NSIC because of his nearly unstoppable top game?  If Minot State loses with Arevalo at 125, 165 becomes a must-win if Minot State is going to have a chance to bring the Barrel on the bus back up Highway 83.

As for that Barrel, those that listened to the Mr. Headlock and the Coach Podcast from yesterday heard me poke fun at the idea of Marauders and Beavers battling over a barrel.  The history of the trophy that will be unleashed for the first time at the Marauder Activities Center Friday evening go back to former Minot State head coach Robin Ersland and Mary head coach Adam Aho mulling over an idea for a trophy.  With the oil boom in full swing across the western half of the state, the idea of a battle for a barrel of oil seemed like a good one.  What does the barrel look like?  Get to the MAC tomorrow and find out.