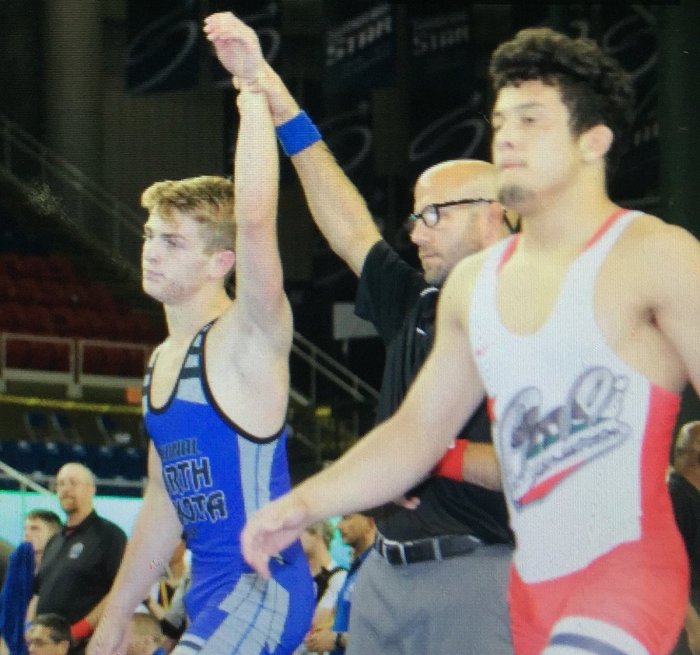 Brandon Metz’s semifinal match probably didn’t start the way he would have liked.  The West Fargo graduate and defending Greco national champion got behind early 6-0 as a result of some aggressive unforced errors.  After the rough start, Metz slowed things down, scored three pushouts, and then hit a classic Metzmode a lateral drop that the Richter scale detected in Peoria, IL.  Metz then controlled the second period and won the bout 7-6.  The win guarantees Metz another match with Anthony Cassioppi of Illinois, who defeated Metz in the Freestyle final four nights ago. It also affords Metz one last opportunity to compete on the raised mat in the Fargodome, where he first made his mark winning a Cadet Greco title four years ago.  No matter what happens tomorrow, Metz goes down as one of-if not the- most decorated wrestler in the North Dakota USA Wrestling nationals history.  Metz has amassed seven All American plaques between the Cadet and Junior divisions, and has won two titles.

Bismarck Century grad Mason Schulz didn’t make the Greco Roman final, but he will wrestle for third tomorrow after falling to Mason Phillips of Washington 17-6 in the semifinals.  Schulz rebounded to defeat California’s Mason Hartshorn 10-0 in 1:40.  With an All American finish, Schulz becomes the first Bismarck Century wrestler to Junior All American in Fargo since Kasey Gilliss and Troy Sabot did so in 1995.