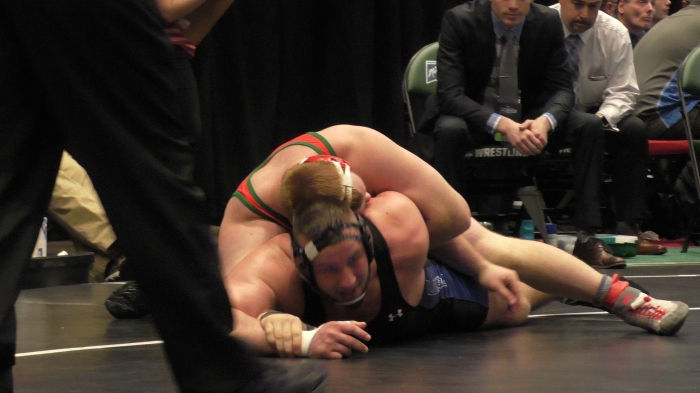 Minot State’s Mitch Eull capped five years in the Minot State wrestling program with a sixth place finish at the NCAA Championships.  Eull went 3-3 over the course of the two day tournament, finding All American honors Friday evening and then winning one more Saturday morning before dropping the final two bouts of his career.  Full started Saturday with a huge victory over Nebraska-Kearney’s Jarrod Hinrichs that vaulted the Buffalo, MN native into the top six.  Ahead 1-0 entering the third period, Eull broke Hinrich from the top position, scoring a two minute ride out and stalling point to grab a 3-0 victory.  In the consolation semifinals, Eull was pinned in the first period by third place finisher Matt Halverson of Wisconsin-Parkside.  Halverson scored a textbook russian tie go-behind and then pinned Eull with legs and a power half.  Central Oklahoma’s Caleb Cotter overpowered Eull 13-3 for in the fifth place match.

Though Eull’s competition career is over, the winningest wrestler in Beaver program history will return next fall as a student assistant.