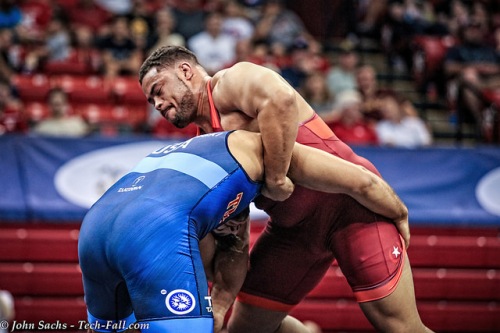 Could the Bison potentially be adding a top flight senior level athlete to their room? According to Dom Bradley in a recent interview with Takedown Wrestling, that option may be on the table. Bradley has spent the last year training in Ames, Iowa at the Cyclone Wrestling Club along with former USA National Team coach Kevin Jackson, and 2017 Trials runner-up Kyven Gadson.

“Where I am at in my career I need to think about coaching in the future,” Bradley said in the interview, “The people that have called me this week has been crazy. I had Olympic champs, World champs, big time programs calling me.”

Bradley went on to list the programs that he has been in contact with, which consisted of Iowa, Nebraska, Northwestern, Michigan, and South Dakota State. Bradley then mentioned that he was actually in Fargo, North Dakota recently to visit with the program and staff.

“I was actually up a North Dakota State checking out with coach (Roger) Kish and coach (Jarrod) Garnett, that was pretty nice up there.”

The one thing that seems certain is that Bradley intends to move on from Iowa State, as the Cyclones didn’t come up when mentioning his future. Also making the paring of Bradley and NDSU more interesting is that while the Bison’s top recruit, heavyweight Brandon Metz has yet to join the team full-time the addition of Bradley would be an excellent training partner for the younger wrestler.

Bradley was a two-time NCAA All-American for the University of Missouri and has made back-to-back U.S. National Teams at 125 kg, taking third and second respectively at the U.S. Trials.

“I like to think of myself as a sponge,” Bradley said at the end of the interview, “Always learning ways to get better.”

The Bradley interview can be found on the latest episode of Takedown TV: